
The surface properties of the ceramic seal ring can be made full use of the surface characteristics of the ceramic material, which is the same as the surface of the metal material. Although the surface of the ceramic seal ring is low after grinding, there are still micro unevenness on the surface, that is, there are many micro convex bodies, and the typical micro convex body and the surface can form certain.In addition, ceramic materials may produce some micro cracks and other defects on the surface and sub surface during processing. The connection seal process of contact seal is shown in Figure 1. In the initial stage of the seal in Figure 1 (a), as the ceramic material has a micro unevenness, the two contact surface also needs a running in period, and two contact and moving ceramic sealing elements, in the process of friction, also have a process from the running up period to the stable wear period. This is because the tiny peaks formed by grinding the ceramic surface are easier to be worn away. At this time, the wear rate is relatively fast. When these minor peaks are worn away, they will enter a relatively stable wear period. The surface of the ceramic sealing element is relatively smooth. During this period, the heat of wear, friction and friction is changing. Under certain pressure, the sealing degree also changes from low to high, and the contact gap decreases. Figure 1 (b) shows that after a period of time, the two contact surface enters the normal seal state, and the contact gap decreases to a minimum, and the wear rate is minimal.

Ceramic materials, except for the existence of micro convex surface, will be covered by a layer of film. There may be an adsorption layer on the outermost layer, which is determined by the type of ceramic material, and can be covered by oxide layer for non alumina ceramics. For alumina ceramics, it itself is an oxide structure, which is mostly composed of surface physical adsorption films formed by condensed water vapor or hydrocarbons in the atmosphere. The micro-structure of the ceramic material is composed of many tiny particles and holes, which provide the conditions for the cover of the physical adsorption film. Therefore, the formation of the adsorbed layer can prevent the wear of the ceramic material, thus ensuring a good seal. 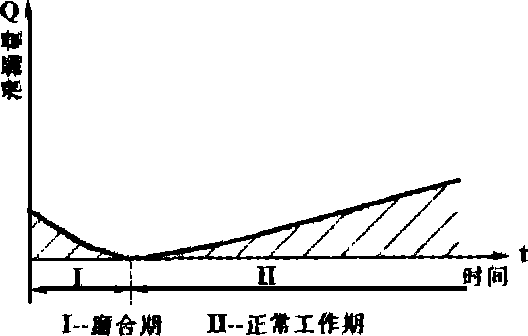 In a sealed structure, leakage is caused by poor sealing. It can be said that sealing and leakage are a common contradiction. Leakage is a phenomenon of mass transfer on an isolating object. In the ceramic seal structure, because of the microscopic unevenness on the contact surface, the leakage is not the same before and in the running in the contact surface. It is closely related to the working time of the seal, as shown in Figure 2. In stage I, the contact gap is larger and the leakage amount is relatively large before the running in period. At this time, the real area of contact is not large, it is only some contact, which causes the friction coefficient to increase, thus accelerating the grinding of the micro convex point. As the time goes on, the gap between the two contact surfaces decreases gradually until the contact state is formed. The leakage is reduced to a zero state. In the II stage, the unevenness of the two contact surface will increase with time. The micro convexity of the two cooperated seal pair is worn out, which will increase the contact area and increase the leakage. For engineering ceramics, because of the good chemical stability and high thermal stability, the leakage rate is very slow.